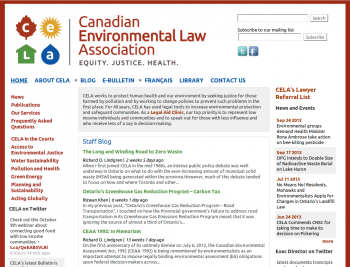 The Canadian Environmental Law Association (CELA) is a non-profit public interest organization established in 1970 to use existing laws to protect the environment and to advocate environmental law reforms. CELA has a long history of involvement in some of the most important environmental litigation in Canada. As a legal aid clinic in Ontario client representation focuses on the needs of low income communities and citizen-based organizations working in the public interest. CELA’s lawyers appear before all levels of federal and Ontario courts and tribunals on matters of statutory law and civil litigation.

We started working with CELA in 2007, providing support for their site that had been built using ActionApps (a non-Drupal content management system). In 2008 they had various concerns about the continued use of ActionApps for their site so we began converting it to Drupal. The new Drupal version launched in February 2009, and has since been upgraded to Drupal 6.

In 2012, we updated the theme with their new logo and other branding elements.

We've been consistently happy with the work Alan and his colleagues have done for us at CELA and CPCHE. They are always fast, reliable, helpful and leave out the geekspeak and/or clearly explain it so we can communicate effectively in meeting our mulitple needs for website building, re-building, maintenance and hosting.