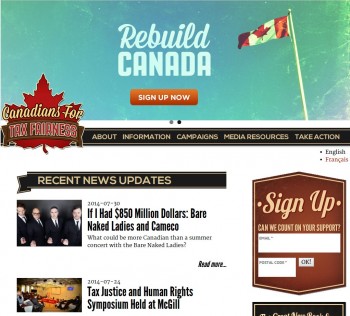 It was founded in 2011 by a broad coalition of economists, researchers and social justice advocates drawn from civil society groups representing faith, labour, international development and community organizations, as well as academia and law and has been featured on influential news program's such as CBC's The National, Power & Politics, and CTV W5, as well as newsapers like The Globe & Mail, National Post, Ottawa Citizen and Toronto Star.

Blackfly Solutions has been a partner in the development of the organization from the beginning. For the first few years, we provided pro-bono hosting and support. Later, they were one of the two supporting partners in the initial development of the CiviNorth advocacy module. And most recently, we upgraded them to Drupal 7 and helped implement a new visual design for the site.