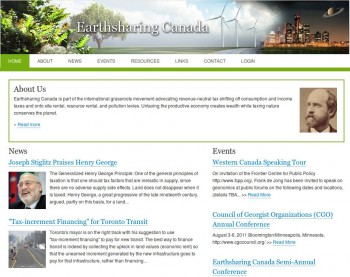 Frank DeJong, leader of Ontario's Green Party from it's inception in 1992 to 2009, came to us to help Earthsharing establish itself with a website. We'd worked with him on the Ontario Green Party site during the 1997 election, and in fact I'd known him from when I lived in Ottawa and was at that founding meeting of the GPO back in 1992, though he doesn't remember.

The site was built very simply, making use of an existing theme called "Austin" and using the powerful out-of-the-box tools that Drupal now comes with as standard. Raymond Scholz came up with the custom banner at the top.

I have known and worked with Alan Dixon for about 7 years and have always found him highly professional, technically proficient, dependable and creative. My rapport with Alan continues to be productive, collegial. He comes highly recommended.