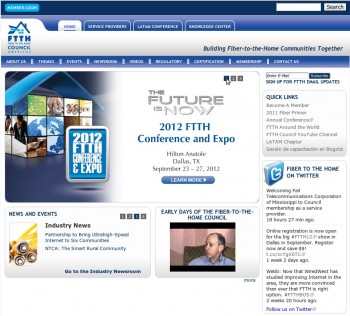 Founded in 2001, the Fiber-to-the-Home (FTTH) Council North America is a non-profit association consisting of companies and organizations that deliver video, Internet and/or voice services over high-bandwidth, next-generation, direct fiber optic connections - as well as those involved in planning and building FTTH networks.

The Council had hired a firm (no longer in existence) to rebuild their site using Drupal and CiviCRM, but due to a lack of expertise, the site was slow and buggy, and the firm went out of business. Blackfly was hired in early 2010 to perform an audit of the site, and then in September, took over the hosting and development.

In December of 2011, we launched a new visual design and accompanying revised site architecture.

In November 2012, a new executive director switched the organization to using an association management organization "Smith Bucklin" that make use of the "Socious" platform.