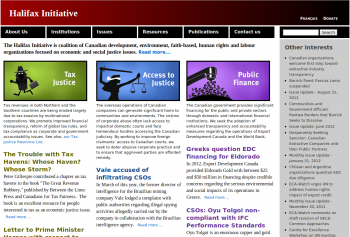 The Halifax Initiative is [ed. "was"] a coalition of Canadian development, environment, faith-based, human rights and labour organizations focused on economic and social justice issues. It was founded in 1994 by Canadian civil society organizations seeking to make international financial institutions and their policies more democratic, transparent and accountable.

The coalition also promotes transparency and accountability in the overseas operations of Canadian companies by exposing the shortcomings of current legislation, policy and practice; by developing alternative proposals; by building support for these alternatives through outreach and public education; and by advocating for their adoption by decision-makers, both in Canada and internationally. Over the years, the coalition has produced research, educational materials, and led campaigns on reform of international finance institutions, debt, the financial transaction tax, reform of international tax rules for multinational companies, and climate finance.

In 2012, the site had been migrated to Drupal from a static site but then abandoned by the previous developer, leaving the Halifax Initiative without access to the server. We made use of some poor security to extract the site and do a little clean up, and then upgraded it to Drupal 7 and put a nicer face on it (design courtesy of Cynthia Hoffos).

After 20 years of public education and advocacy work on the international financial institutions, the Halifax Initiative closed its doors in early 2015. The website now archives much of the coalition’s work since its formation in 1994.

A new organization, , was established to build on the Halifax Initiative’s work on corporate accountability.