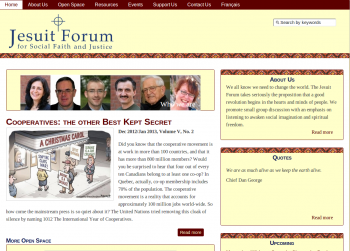 The Jesuit Forum for Social Faith and Justice is a Toronto-based initiative of the english speaking Jesuits of Canada. It offers an open space for people of goodwill to meet, build relationships and create communities of solidarity through a process of communal discernment. It continues in a new form the mission of the Jesuit Centre for Social Faith and Justice, founded in 1979.

Anne-Marie Jackson is the director, and also an old friend, who contacted us (meaning, me) in July 2012 to help with the site. That site had been built two and a half years earlier, and hosted by another development shop, and was not bad for a first version. Aside from general awkwardness of use by visitors and her frustration with trying to maintain it, which was why she'd originally looked us up, we identified some related problems:

The bit that most stuck out for me was the content on the front page - a long list of links to other organizations. Sure it was a networking organization, but the fascinating content being created was hidden in a pdf and the initial experience of visitors was "hey go visit these other sites".

While I like to point fingers at other developers, in this case I had some sympathy. It is a challenging mission to get across, and the initial work had clearly been in the right direction. Which is why I'm calling this new version 2.0.

The new version is now on Drupal 7, on a snappier server, with a whole lot more content, a modified, responsive design, etc., etc. You can read more on the issues of colour and responsive design on my blog.