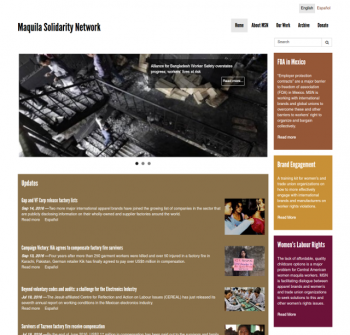 The Maquila Solidarity Network (MSN) is a labour and women's rights organization that supports the efforts of workers in global supply chains to win improved wages and working conditions and a better quality of life. They're based in Toronto and have been around since the early 1990s.

In 2008, Blackly helped move their constituent management from a collection of desktop systems to CiviCRM. Aside from supporting their work I was especially happy to work on this project because they had come to me understanding what they needed and were already convinced that CiviCRM was the right tool. An outside consultant volunteer had greatly helped them write out what they wanted from the project. Their main goal was to integrate all their systems into one and having it web access enabled them to do this because of the distributed nature of their network. A number of other advantages to using CiviCRM were icing on the cake. The project started in August 2008 and was mainly finished by the end of September -- remarkably quick thanks to the headstart they had provided with all their requirements work.

In December 2014, Blackfly took on the hosting of their previous site as archives and helped build a new site for them.