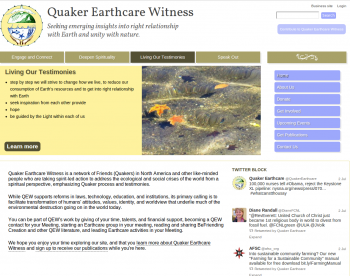 Quaker Earthcare Witness (QEW) is a network of the Religious Society of Friends (Quakers) in North America and other like-minded people who are taking spirit-led action to address ecological and social crises from a spiritual perspective, emphasizing Quaker process and testimonies, including continuing revelation.

QEW has grown over the last 25 years out of a deepening sense of spiritual connection with the natural world. Out of this has come an urgency to work on climate and related issues.

In 2011, Anne Mitchell took over as General Secretary from a team that had been in place for about 10 years, and contacted me (Alan) to help with the Access database that contained mailing list and some donation data, used primarily for their paper-based newsletter Befriending Creation. Their website had been built and maintained with Dreamweaver by the publications coordinator.

After more work than any of us were expecting, in 2013 we launched a new public website build with Drupal 7, and a companion OpenAtrium site for internal communications and to hold the old Access data as well as other lists that had been maintained in other forms.