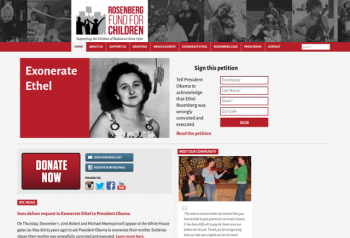 The Rosenberg Fund for Children (RFC) was started by Robert Meeropol, who was orphaned at age six when his parents, Ethel & Julius Rosenberg, were executed at the height of the McCarthy Era. RFC is a non-profit, public foundation that makes grants to aid children in the U.S. whose parents are targeted, progressive activists.

They also assist youth who themselves have been targeted as a result of their progressive activities.

RFC came to us in Aug 2010 looking for support and development for the Drupal/CiviCRM that had been built for them but wasn't performing well. We cleaned up a few security and development issues and migrated it to a new host, and then upgraded CiviCRM.

In March/April 2011, Thomas Cheung rebuilt the theme to improve the site experience of visitors - it needed some visual cleanup as well as layout/architecture improvements, and the previous theme was not well built and was hard to maintain.

In Jan 2013, because of erratic performance issues on the previous host, we switched the site over to our Blackfly hosting service.

In March 2015 we upgraded them them to Drupal 7 and built a petition for their campaign to exonerate Ethel Rosenberg.