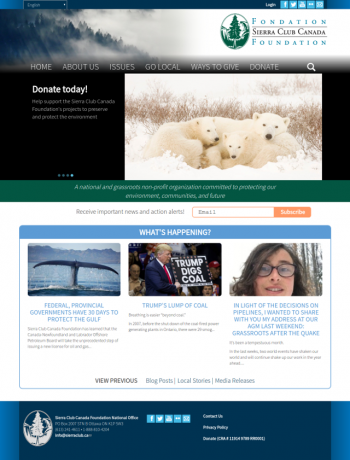 The Sierra Club Canada is one of North America’s oldest and most established environmental organizations. With thousands of members and supporters they have been safeguarding the environment and working towards a sustainable Canada for our future and the present. The national office was established in Ottawa in 1989.

As a member-based organization they were using Raiser's Edge (a desktop-based CRM) to track contributions membership event participation and other details. In 2008 they decided to convert to CiviCRM for these functions and at the same time convert their ActionApps based site to Drupal. I helped them with both conversions and the new site was launched in December 2009. You can read my blog about some advanced techniques I used in the CiviCRM migration.

In 2015 I helped them upgrade their site to Drupal 7 and a new modern responsive design, and we now host it and their archived previous sites. They are also now making better use of their CiviCRM functions which had been somewhat neglected over the years.

Alan has been a real pleasure to work with. He has been an invaluable resource in the development of our new website and membership system, going above and beyond the call of duty in helping us get set up and comfortable with our new site. Thanks to his deep knowledge and experience with Drupal and CiviCRM he has found solutions to problems that would have had us stumped for weeks. He is sensitive to the needs and budgetary constraints of non-profit organizations like ours, and worked with us setting up our new server to ensure the smoothest transition possible.