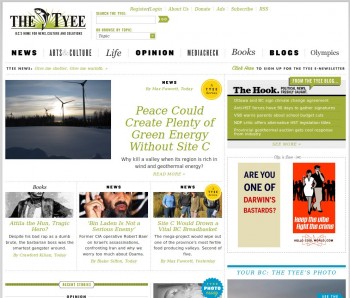 The Tyee is British Columbia's online source for News, Views, and Culture, published weekdays. It was created in 2003 by David Beers and has been swimming upstream against the media trends of our day, resolutely independent and reliably controversial.

Like all good news sites, it provides an opportunity for readers to comment. The site is built and deployed using Bricolage. In 2006, I was approached to help convert their comments from VBulletin to using Drupal. To allow them to keep using bricolage, I developed the bricolage integration module for Drupal, and have been working on it with them since then. You can read about my work on this site during the 2009 redesign in my blog post.

The biggest challenge of the site, other than my custom module, is the sheer size and traffic on the site. Over the past year, I upgraded the site from Drupal 4.7 to 5, and provided Drupal expertise for their new design. The site is excellently hosted at Gossamer Threads.

A few years ago, The Tyee found itself in a bit of a pickle. We had a great content management system in Bricolage, but not a great commenting system. Alan developed with The Tyee an innovative way to integrate Bricolage with Drupal, which had much more robust community management features, including a commenting module. It was a first-of-its-kind innovation and it’s been working well ever since. We’ve since expanded our site’s Drupal functionality in small but significant ways, each time relying on Alan’s wise counsel and expert skill set.